Problem - I have just put the reconditioning kits through the 4 x 42DCNF carbs on my Jalpa. Once I turn the ignition on, the fuel pump starts up. I watched the carbs for leaks just to make sure everything was tight. I observed that one of the carbs after about one minute of having the fuel pump on starts to leak fuel into the 2 Carby barrels. It appears as if the fuel is dripping from the auxiliary venturi (This is the tube that runs down the centre of the main venturi). This is the two barrels indicated by the yellow arrows. The fuel is then puddling on top of the throttle plate (Butterfly thing at bottom of carb). I am unsure where the problem is. I have tried to adjust the float level to shut off the supply of fuel earlier but with no luck. It is affecting both barrels. I am thinking that possibly the needle and seat could be faulty so will try and check that soon. I haven't been able to find any documentation on how the fuel flows through the weber carby and where all the little alley ways go to. I was thinking of getting one of the Haynes weber carby manuals but the index page doesn't look like it is going to show me anything about how the fuel flows through the carby. I have checked the main jet to make sure it is sealing properly where it mates with the seat and that all looks good. If anyone has any idea of where I should start to look, or had similar problems and knows the answers, that would be helpful :-) 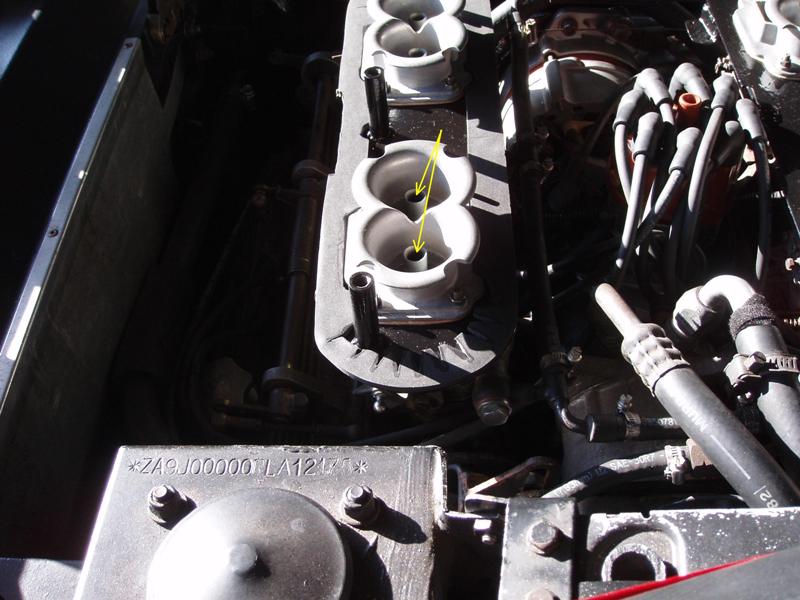 - Worn needle valves and seats - replaced them with viton needle valves from Redline Weber, big difference, much better than the run of the mill seats.

- Sticking floats - bought new floats, set travel carefully and still had to tweak the metal arms a bit to keep the floats from catching on the sides of the bowl (but only when the bowl was empty and I had full travel).

- By far the most significant catch in terms of impact - my facet fuel pump had failed - was putting out way more than 6 PSI when cold and way less than 3 PSI when the engine had run a while and the pump was hot. Puzzled over associated behaviour (one symptom was the needle valves wouldn't always seal when the pump was cold) and finally found the problem by putting some simple pressure gauges in-line (in the fuel line) on the way to the carbs - inexpensive diagnostic. Changing the pump out and resetting the fuel pressure regulator solved the problem.

Just some things to think about based on my limited experiences .

Possibility 2 - I would strongly encourage you getting a pro to look at those. I was going to do mine myself and a couple mechanic buddies talked me out of it. I had them done by a carb specialist and I am very glad I did. He told me they were coroded inside, a bearing had siezed on one. They were all terribly out of synch. It took him weeks to do the job. When I got them back, they looked amazing and they were in perfect synch when put back on the car. All eight intakes can be tuned individually. Without a flow bench this is extremely difficult.

I have no idea what your experience level is, but if you are unsure, I think it would be money well spent to get a carburettor specialist to go over them.

Possibility 3 - What I found was if the needle valve doesn't seal on the IDFs the float bowl fills up until the gas level exceeds the level of the carb top gasket and even with brand new gaskets I found gas leaking into the throats and with old gaskets even worse. You might want to change your oil (could be diluted with gas) .

Possibility 4 - First things I did on my Jalpa was to replace all the fuel line hoses. I noticed that once the fuel goes through the fuel rail it then had a hose that went straight back into the fuel tank. If I opened the fuel filler cap I could hear the fuel re-entering the tank. The fuel pump runs continually, not that you notice it with the engine running, but if you listen carefully you can hear it. This may mean that I will never get suitable fuel pressure and suffering the low fuel pressure problem that you mentioned. I will see if I can find a suitable pressure gauge.

Possibility 5 - This flow back into the fuel tank has a limited diameter (less than one millimeter). They had to do it because it's not an electronic fuel pump which shuts down when the pressure is reached. You have to adjust the fuel pressure with the regulator (the glass with the fuel filter in it), perhaps the fuel filter is stuck.

Possibility 6 - My car had an inline fuel filter coming up from the fuel pump and heading to the rectangular fuel rail. I have replaced this filter with a new inline filter but there is definitely no adjustment on it. I restricted the fuel leaking back into the tank by using a set of hose pliers to reduce/stop the flow. This would have increased the pressure in the fuel rail. This only made more fuel leak into the carbs. I eventually decided to fire the car up, when the engine is running. You cannot see any fuel dripping from the auxiliary venturi but this may be because it is atomising with the air flow generated by the engine idling. It appears to be ok and I have the engine running smoothly, as long as I don't leave the ignition on without the engine running. Its not ideal and I would like the carbs to work properly. The longer I leave the ignition on the more carbs start to leak.

Possibility 7 - You likely need that fuel pressure regulator. Many replacement pumps that I've seen hawked are putting out 6+ PSI. Not sure of the original pump in the Jalpa, but it may well be in this range as well. It is my firm understanding that our webers need maybe 2.75 PSI. If you are over pressurising the line (as I was with my faulty pump), the needle valves won't seal and you'll eventually fill the float bowl and see fuel coming down the throat. If the car is running, it is drawing fuel from the bowl normally and you need more flow from the pump for the bowl to over flow. Your pump may not have enough flow to cause a problem when the car is running (or, as you say, with the airflow down the throat you might not spot a trickle that would pool in the throat when the car was not running).

In the States, I went to my local Autoparts store (a PepBoys) and bought an inexpensive 1/8 NPT inline fuel gauge for about $12 USD. I had to go to the plumbing section of the local hardware store to find a barbed brass T with a center hole for the 1/8 NPT fuel gauge and barbs on either end to mate with the fuel lines - about $2 USD. Armed with this 'contraption', the first thing I did was connect the output of the fuel pressure regulator (in your case the filter) to one barbed end and the existing fuel line to the other. Turn on the pump (don't start the car) and you'll see if your pressure is off. If it looks good, start the car and run for a while (say 20 minutes), periodically checking the gauge (and your carbs - you don't want any fuel fires) and make sure it maintains at roughly 3 PSI.

If you prefer your inline fuel filter to the regulators with filters, buy a regulator only. It should install the same as the combined unit and use your inline filter (or use both filters just as long as you have sufficient flow).

One word of caution, I was not able to adjust the regulator with any accuracy while the pump was running, particularly when trying to reduce pressure. The last makes some sense to me fluid dynamics wise. So, if your pressure is off, try tweaking the regulator (there's a simple screw or nut adjustment depending on brand on top) with the pump off and then fire up the pump again.

Also, not to be alarmist, but be aware that enough gas could dilute your oil as well as wash away the slight oil seal around the ring. If you eliminate the overflow problem when the car is not running, IMO you should have it licked when the car is running.
Sentry Page Protection
Please Wait...