Time to get started on the CV boots.
First problem I had was getting the 36mm nuts off the end of the drive shaft. As in Picture 1, I had it mounted in the vice. Probably would have been ok it it was still in the car but I was unable to provide enough torque to get the nut undone. I had a 3/4 inch socket and extension bar with a pipe on the end of that and was about to rip the vice off the bench. I then took it down to the workshop to get them to loosen it. They used a 3/4 rattle gun to get if off.
Once back home, I could take the nut off and pull the shaft out the back of the hub as in Picture 2. I have also pointed out that there are 4 allen key bolts that need to be undone and then the joint splits where the green arrow is pointing. I have already done this in the next picture.
In Picture 3, I have already removed the two metal retaining straps that keep the rubber boot in place. I was actually surprised at how good the rubber still was on these old boots. I then removed the circlip from the end of the shaft to allow me to tap the CV joint off.
In Picture 4, I am using an aluminum drift, to take the CV joint off the end of the spline. There is a washer on the inside so have to remember to put that back on before installing the joint.
Once I had it all apart, it was time to degrease everything and get it cleaned up. After the first degrease, I have oiled all the metal parts so they don't rust. I will degrease again before repacking the bearings.
I then had to clean up all the hubs and drive shafts ready for painting with POR15.
In Picture 5, you can see the hub once it has been wire brushed then prepped with wax & grease remover. Some of the parts I won't paint due to them having shims and any extra paint may change the tolerances. A couple of places I did paint accidentally, I will sand off prior to installation. Anything that is not painted will be installed with a coating of high temperature bearing grease to stop rusting. 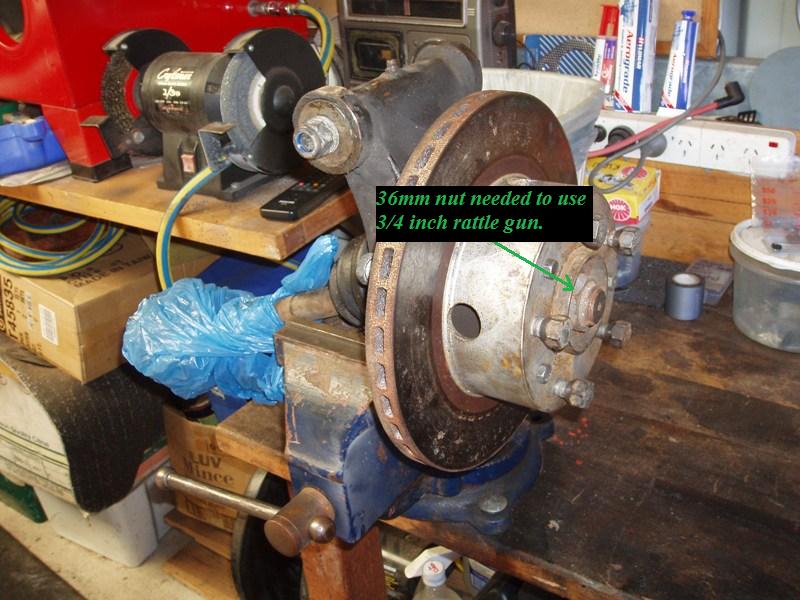 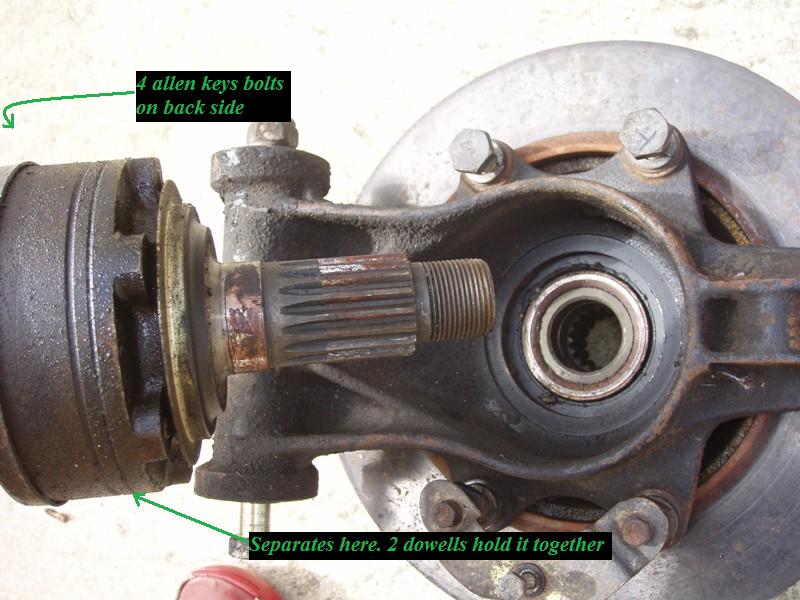 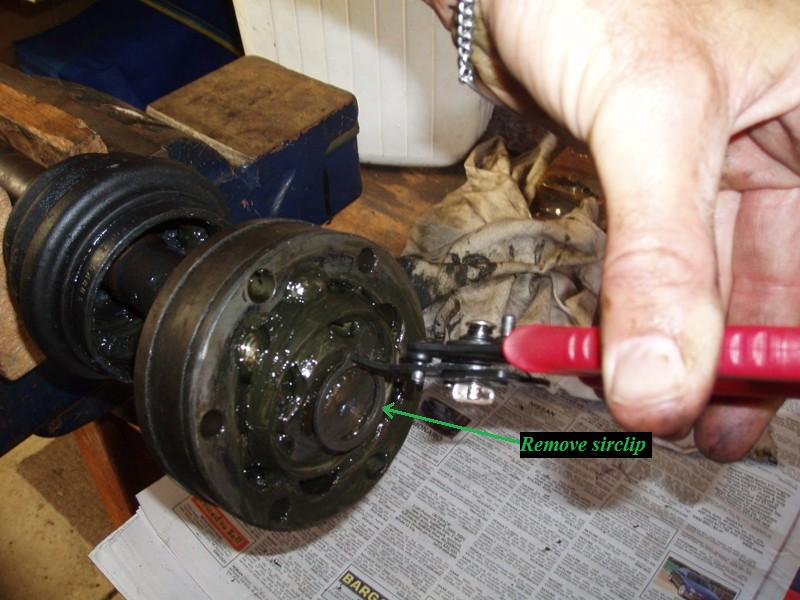 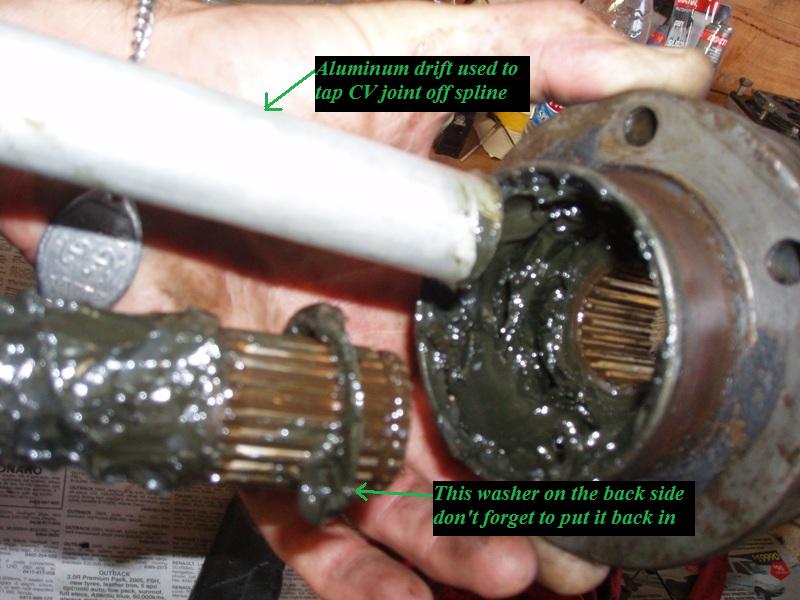 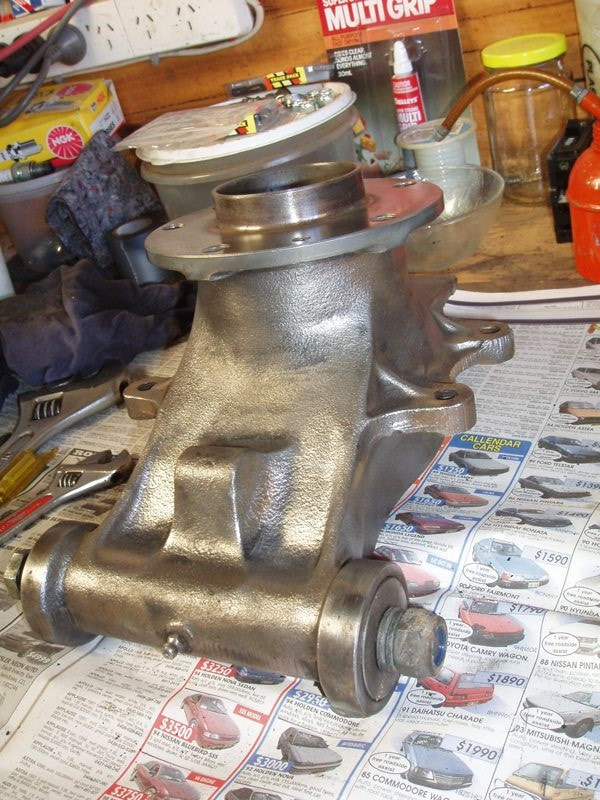 ​The Picture 6 is after I had wire brushed and painted the drive shafts & CV joint housings in the POR 15 paint. I have placed the shaft in the vice and pushed on the first CV boot. I have read a number of sites that suggest you don't need to put the washer on as it can be difficult the get the circlip on at a later stage. I trial fitted mine and in went on ok so I added it back on. (This joint is similar to the ones used on the early VW beetles so there is plenty of stuff on the net in regards to assembly and disassembly.
If you do take the CV joint apart when you are cleaning the joint, make sure you don't mix anything between the different CV joints (do one at a time). Once the joint is off the shaft, you are able to spin the centre around to remove the balls. As in Picture 7, you need to make sure that you align the large outer spacing with the small inner spacing, otherwise the joint won't work and it will go together in the wrong position. Good idea to mark every thing as you take it off so it does go back together correctly.
In Picture 8, I filled the back of the CV joint with grease. I need to keep a little for the other side and the rest goes in the boot.
In Picture 9, I used the aluminum drift to tap the CV joint back onto the shaft.
In Picture 10, I have put the circlip back on. NOTE if you cannot get the circlip to fit back on, many sites suggest you can remove the bottom washer (Picture 6) which will give you some more clearance. Mine did fit back on ok with the washer in place. 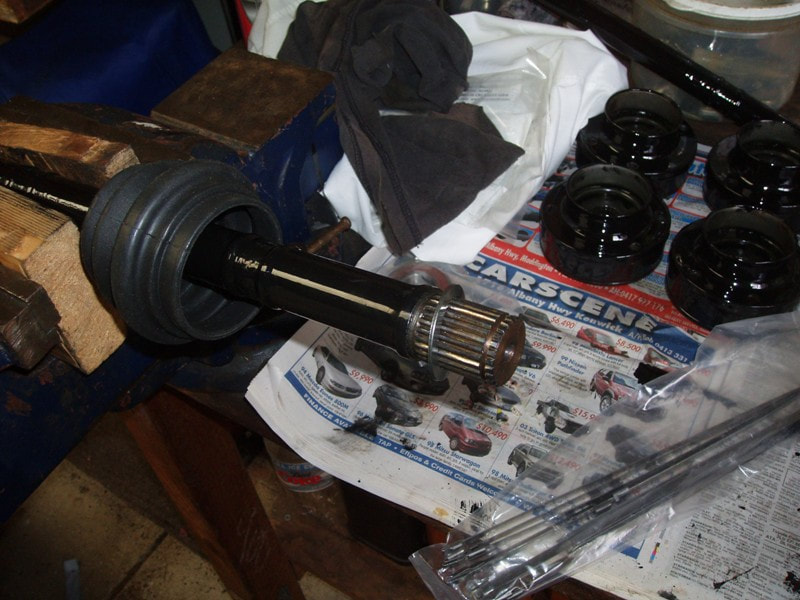 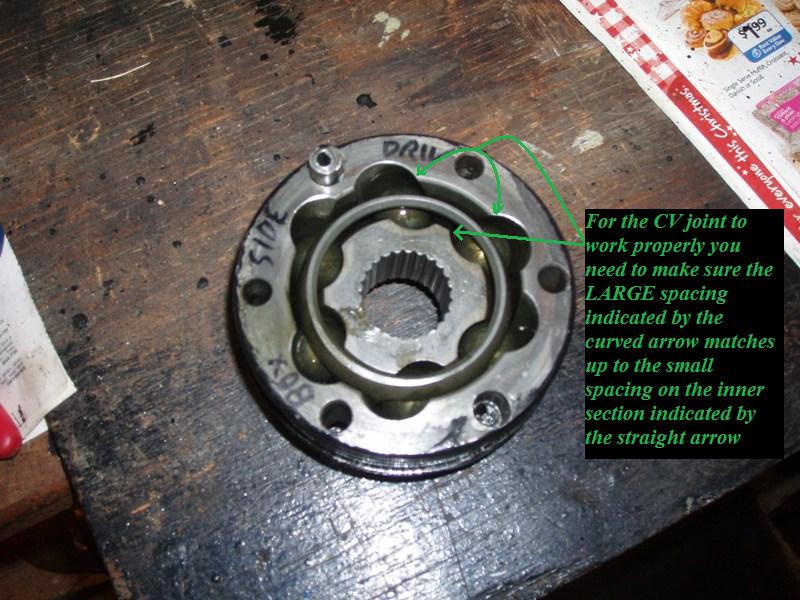 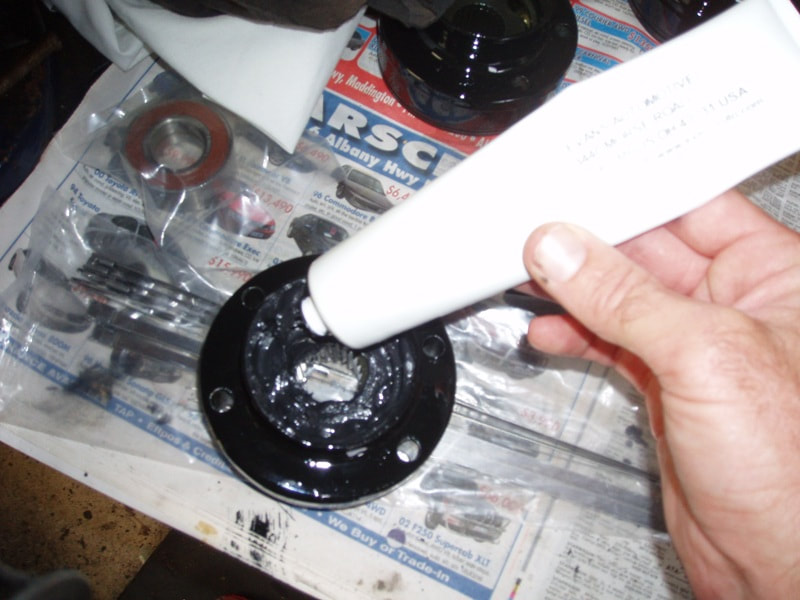 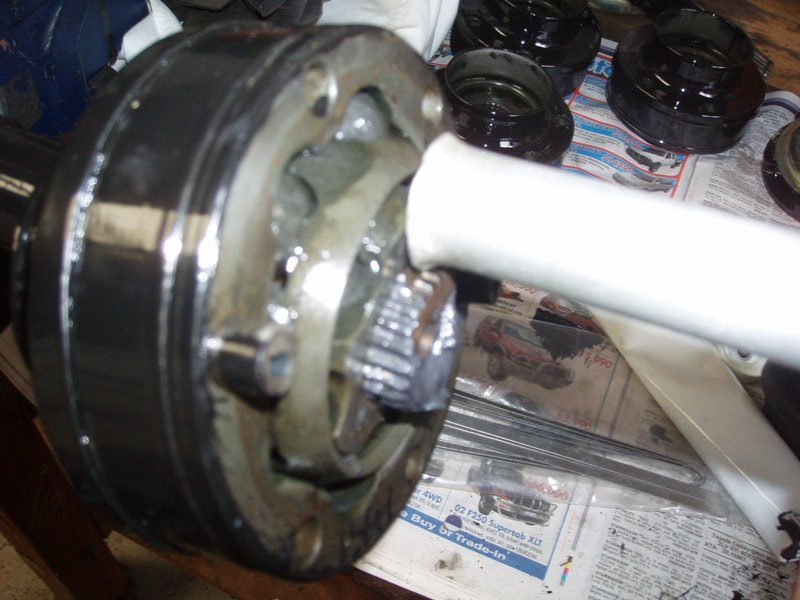 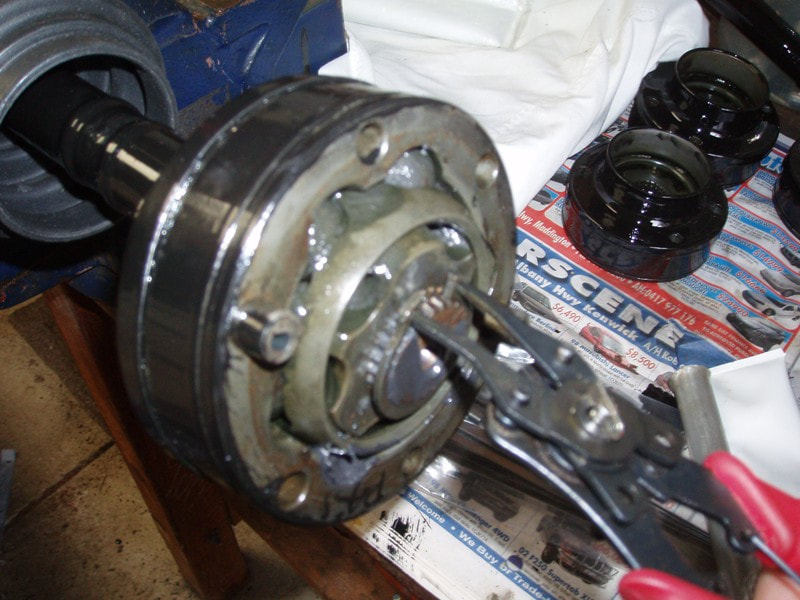 ​Once I had put the rest of the grease in the boot I pulled it up over the lip of the CV joint and applied the retaining strap as in Picture 11.
It is now time to put the spline back on. I cut out a new gasket from appropriate thick gasket paper. There is a recess this fits into on the other half. It will be obvious when it comes time to doing it. I also applied a good amount of grease to this side as in Picture 12. I also applied Hylomar gasket cement to this gasket.
Because of the dowels in Picture 12, it may be necessary to lightly tap the spline onto the dowels as in Picture 13.
As in Picture 14 the washers and allen key bolts were put back on and tightened down.
The last Picture 15, rewire the allen key bolts so that they don't rattle out. 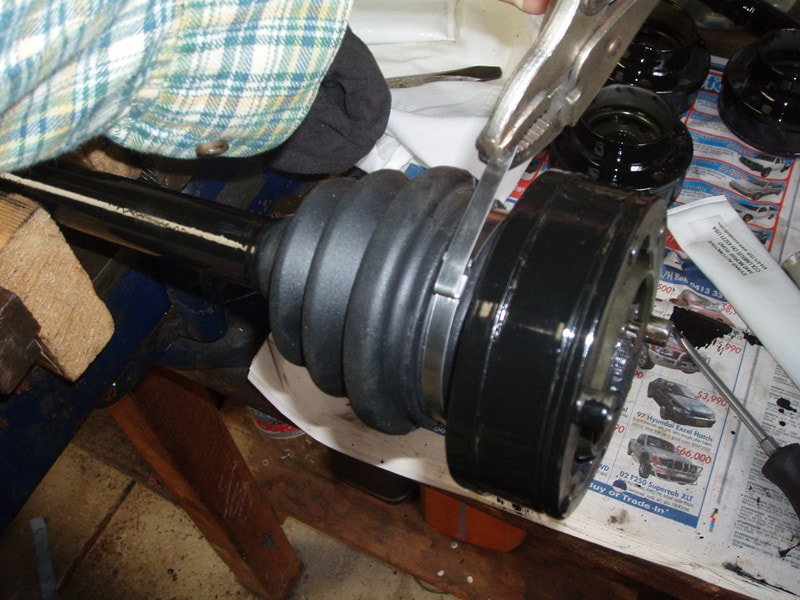 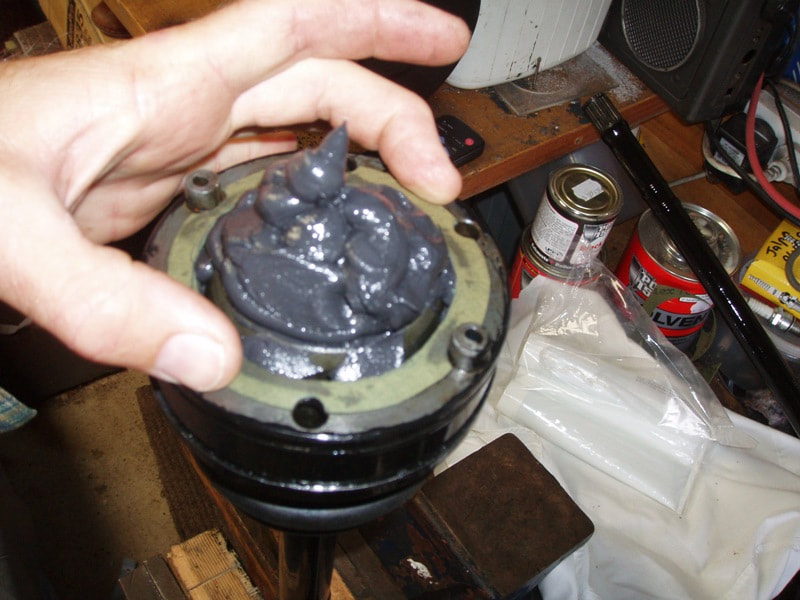 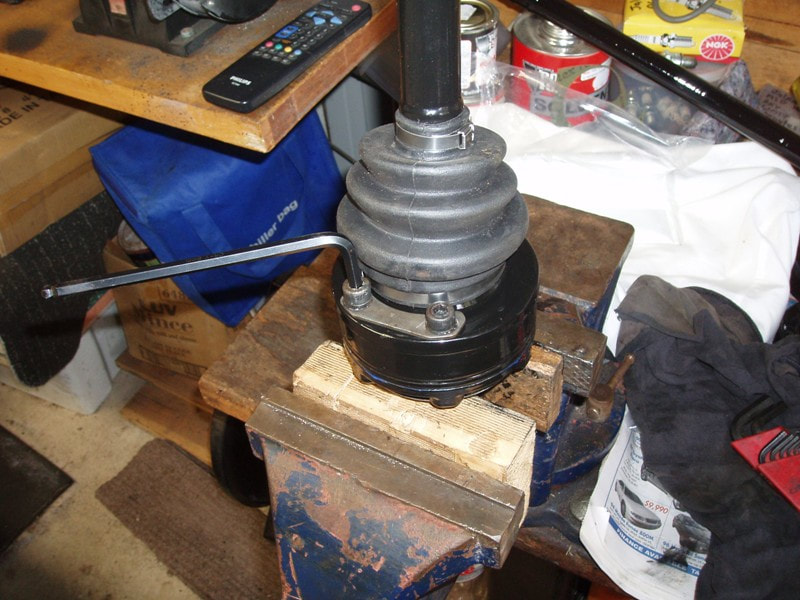 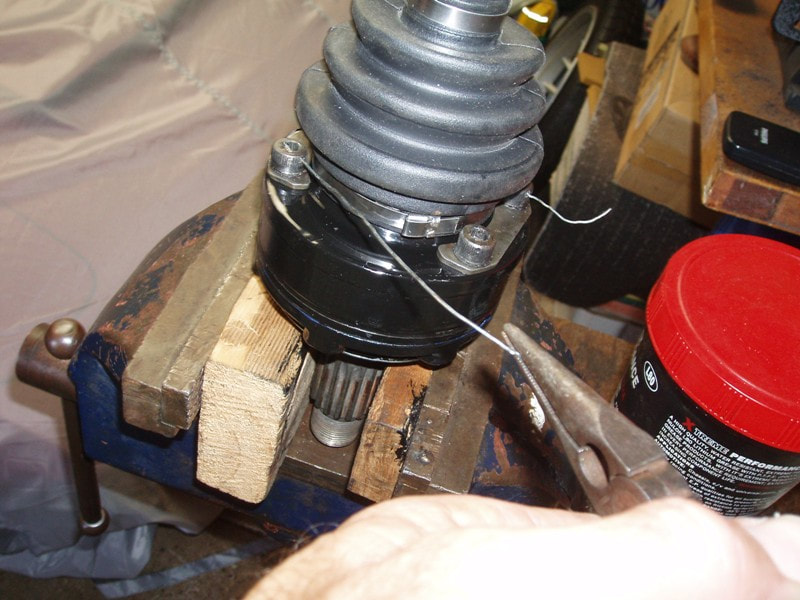